What is Billable Expense Income?

What is Billable Expense Income? If you are running your own business, you must be deeply familiar with invoices and bills. After all, no business can survive without sending, receiving, and...
END_OF_DOCUMENT_TOKEN_TO_BE_REPLACED
All Posts

In the olden days, before computers and software, accountants and bookkeepers recorded every financial transaction by hand. It was tedious work. Businesses had books and binders full of paper, each one containing dozens of transactions.

At the heart of it all was a master book known as the general ledger.

Although software programs now handle a good chunk of these tasks and store all your information in one place, there’s still a general ledger hiding on the other side of that screen.

Below is a guide to this vital portion of your accounting system. You’ll learn more about what a general ledger is, how it works, and how it helps your business.

What is a General Ledger?

A general ledger is a central set of records in your accounting system you use to record and sort through all your business’s transactions.

General ledgers have five different types of accounts. Each journal entry uses at least one of them:

The first three are balance sheet accounts. They’re permanent. You don’t close them out at the end of an accounting period.

On the other hand, the last two are income statement accounts. These are temporary, meaning you do close them out to permanent accounts once an accounting period ends.

How Does a General Ledger Work?

As mentioned, the general ledger is at the center of your accounting system. Many transactions don’t end up there at first until later in the accounting cycle, though.

See, you also have several journals and subledgers for certain repetitive transactions, as defined by your chart of accounts.

For example, you have a subledger for accounts payable. Plugging every individual A/P transaction into the general ledger would clutter it too much, so the A/P subledger is used instead.

It’s the same way for several other types of transactions.

Only at the end of an accounting period do you perform a few entries to post the total balances in these subledgers to the general ledger. These are posted to control accounts, which essentially summarize the total amounts from these subledgers without the nitty-gritty details.

Back to the example, all individual A/P subledger transactions are added together and posted to Accounts Payable, a control account.

Fortunately, many software solutions automate much of this process today. Subledgers may be connected to the general ledger, allowing information to flow more easily.

All that said, you post some transactions directly to the general ledger.

The General Ledger and Double-Entry Accounting

Double-entry accounting is the accounting system used by a vast majority of businesses.

Transactions are called journal entries. Each journal entry consists of at least one debit and credit (each getting a separate column in the ledger), hence the “double-entry.” Total debits and credits must also equal each other in each transaction. Debits on the left, credits on the right.

Underlying this system is the accounting equation:

Most general ledgers also include columns for each debit and credit amount and a brief transaction description. Of course, the accounts themselves are also named.

Here are some examples of general ledger journal entries:​​ 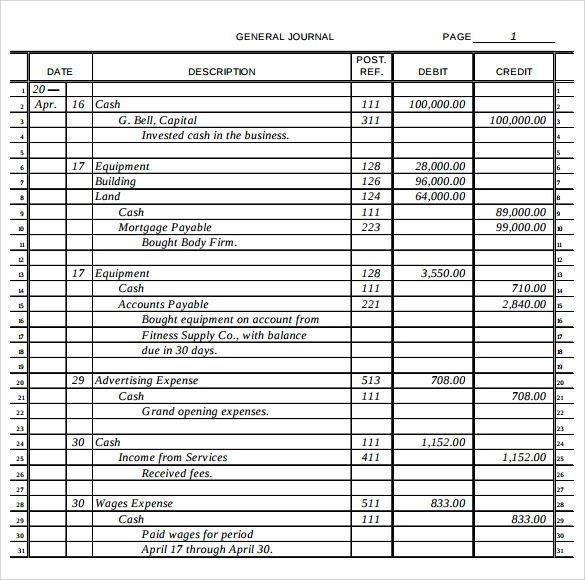 Later in the accounting cycle, you create a trial balance with the general ledger to ensure everything balances. If it doesn’t, you can then investigate and fix the errors.

How the General Ledger Helps Your Business

Only freelancers and sole proprietors can truly get by without a general ledger. A general ledger becomes almost essential once you add the slightest bit of complexity with employees and whatnot.

Here are some ways a general ledger can benefit your business.

Running a general ledger report lets you see a summary of all activity over a specific timeframe in detail. Such flexibility offers plenty of opportunities to find areas of improvement.

The general ledger lets you create a trial balance, as previously mentioned. This trial balance gives you a chance to see what doesn’t balance, then dive in to investigate where the error lies and fix things.

Additionally, it can help you find suspicious activity that could potentially be fraud.

Paying taxes can be painful, but gathering all the documentation and information needed to file them correctly is much worse if you’re unorganized. Then, if you face an audit, you have to scramble for that information again to avoid huge potential IRS punishment.

You can cut much of that worry out with a general ledger. Income, expenses, assets, and so on are all in one place. Whether you’re reporting your income, providing the IRS auditors with information, or planning for future taxes, your general ledger saves you time and stress.

General ledgers are the heart and soul of any business’s accounting system (beyond a sole proprietor, of course). It helps you organize and summarize your financial records, making it easier to keep your finger on the pulse of your business.

Accounting software solutions like ZarMoney handle a lot of the tedious general ledger tasks, though. Try ZarMoney free for 14 days today to see how easy general ledger management is!

ZarMoney does it all... and does it better.

Keep In Touch With Us